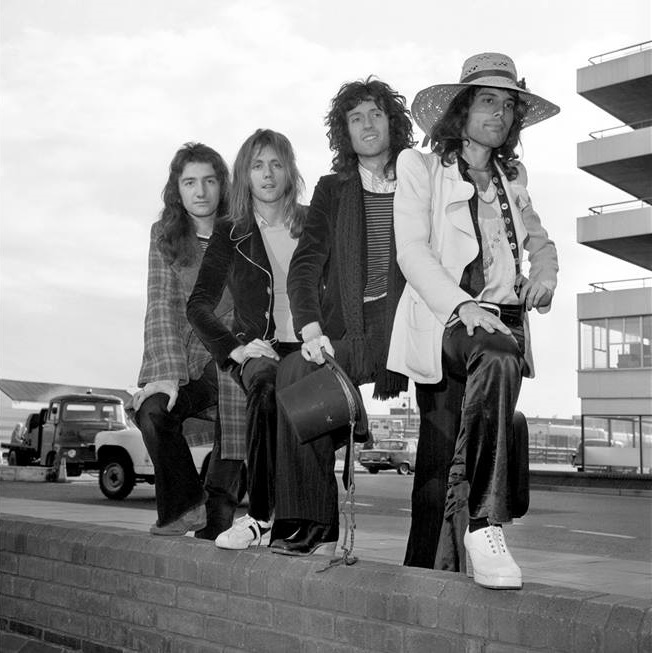 1971: New bassist Doug Bogie fired after two gigs for being too jubilant on stage (“no one told me that what Freddie wanted was a quiet thumper in the back”). Queen finds a quiet thumper in the back, John Deacon (Chelsea College). Cemented at last, Queen strike a deal with De Lane Lea Studio—they make a demo while being guinea pigs for the engineers, forever testing microphones and baffles. 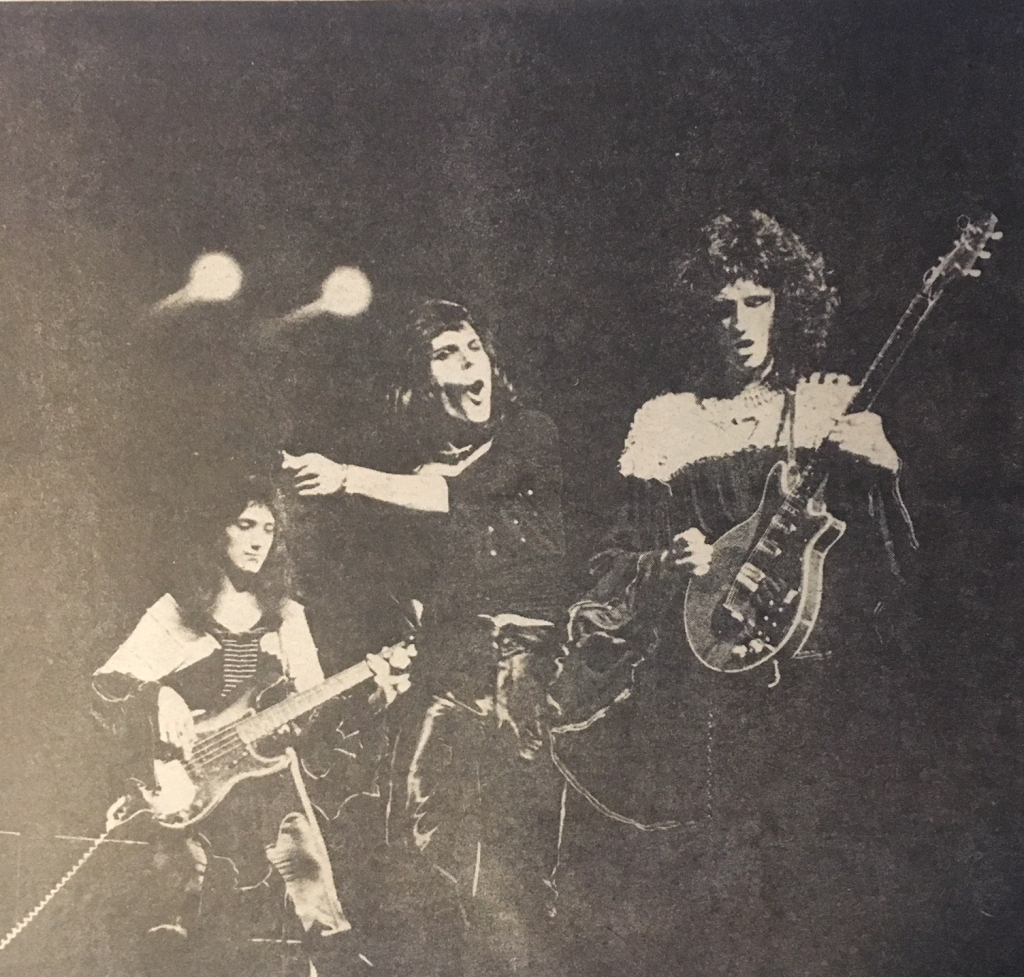 1973: Queen signs with EMI in UK, Elektra in US (EMI A&R head Bob Mercer: “There wasn’t a weak link in the band. Usually the bass player is off or the drummer’s a wanker.”) Queen released, to little attention. May: “We felt the record was old-fashioned by the time it came out.” In August, second album is cut at Trident; originally titled Over the Top, ultimately Queen II. Autumn tour with Mott the Hoople is Queen’s first non-UK gigs.

1974: Brief, unhappy tour of Australia. Debut TV performance “Seven Seas of Rhye” (UK #10) on Top of the Pops, where they substitute for an absent Bowie. During spring US tour, May contracts hepatitis, thanks to a dirty needle when he was inoculated for Australia. Deacon, Taylor, and Mercury record much of Sheer Heart Attack in August, with May doing overdubs whenever he’s out of hospital. “Killer Queen” (UK #2) released in October.

1976: All four Queen albums in UK Top 20. Tours of North America, Japan, Australia. A Day at the Races, first self-produced album, another UK #1. Queen’s cancelled appearance on Bill Grundy’s Today leads to the Sex Pistols substituting. Chaos ensues; Queen set up in music press as one of punk’s archenemies.

1977: Queen gives Groucho Marx tour jacket and gold record after he sends telegram congratulating their taste in LP titles; Groucho subsequently vetoes use of Duck Soup for what becomes News of the World. Latter is cut in part at Wessex Sound, where the Sex Pistols are completing Never Mind the Bollocks; Sid Vicious and Mercury collide (some variation on “oh, it’s Freddie Platinum, bringing ballet to the masses”). “We Will Rock You”/ “We Are the Champions” #4 in the US, where Queen plays Madison Square Garden and Mercury meets idol Liza Minnelli. Reid and Queen part company (Reid gets 15% of royalties on Queen’s earlier albums in perpetuity). Band business affairs now handled by Jim Beach, who handles them today.

1978: Queen consider becoming tax exiles, recording at Mountain Studios in Montreux, Switzerland; they buy the studio the following year. Jazz a UK #2. Promo gala in New Orleans the peak of their notorious parties, allegedly featuring fire eaters, mud wrestlers, a girl borne on a salver of raw liver and dwarfs ferrying, via their bald heads, trays with lines of coke. Taylor, on the latter: ‘Look, if it’s true I never saw it. But I have to say that most of the stories from that night are not that exaggerated.”

1980: Mercury has new “Castro clone” look, reportedly inspired by seeing Village People’s Glenn Hughes at the Anvil in NYC. The Game #1 in UK/US; “Another One Bites the Dust” another US chart-topper. Queen records soundtrack to Flash Gordon (Italian space princess, Gordon’s alive?, fourteen hours to save the earth). As per biographer Mark Blake, they have sold 25 million singles and 45 million albums and appear in the Guinness Book of Records as Britain’s highest-paid company directors (£700,000 annual salary each).

1981: Queen plays football stadiums in Argentina. In Brazil, Queen’s bodyguards are assigned from the military government’s death squads (Mercury: “They were the heavy, heavy police who actually kill people at the drop of a hat”). In summer, Queen cuts “Under Pressure” with Bowie at Mountain. A UK #1; Mercury-era Queen and Bowie never perform it together.

1982: Hot Space released in May. “Body Language“—in whose MTV-banned video Queen does awkward hand-snaps in a bathhouse—is last Top 20 US hit for Queen until Mercury’s death; their July-September tour is their last in North America.

1983: Agreement (eventually scrapped) for Queen to soundtrack The Hotel New Hampshire (bombs, bears, incest, “keep passing the open windows“) has them recording for months in Los Angeles, completing what becomes The Works in Munich. 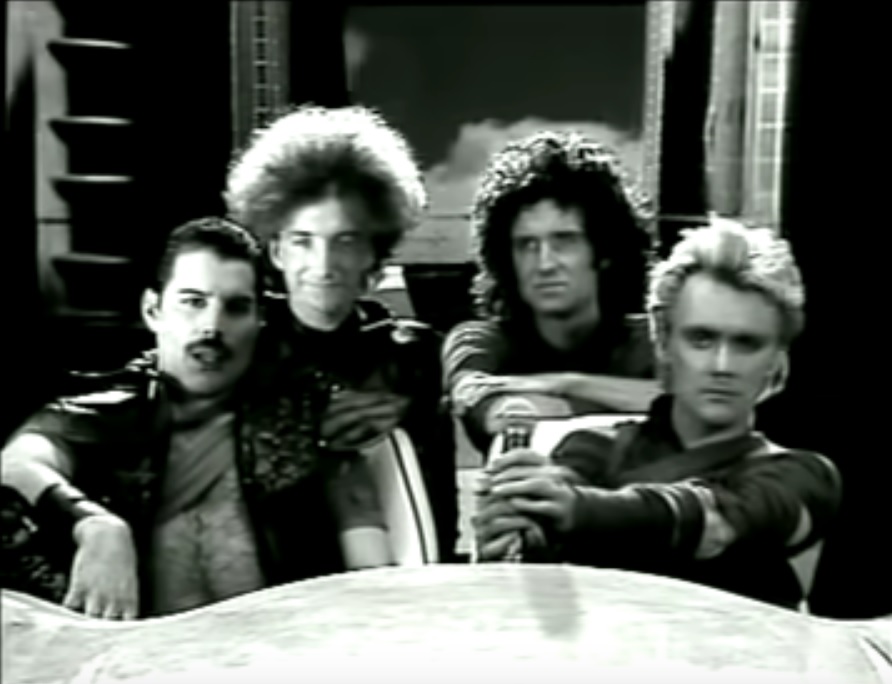 1984: Queen signs with Capitol in the US. A bad bet for both parties—fallout from a payola scandal leads to American DJ blacklist of Capitol singles, including “Radio Ga Ga”; homophobic reaction to “I Want to Break Free” video sours Queen’s US commercial prospects for rest of decade. In October, defying United Nations cultural boycott, Queen play Sun City in apartheid South Africa. Criticism rankles. Taylor, to Smash Hits: “People like Paul Weller never stop to think. They see things in such simplistic terms—in such puerile terms. And I get really angry when arseholes like Daryl Hall…hair-dos like Daryl Hall start going on about it when they haven’t got a clue!”

1985: Tours of Japan, Brazil, Australasia, Live Aid at Wembley. You’ve likely seen the latter performance if you’ve made it this far. Recording of A Kind of Magic, songs also intended for Highlander (immortal warriors, beheadings, swordsmanship, winner gets prize).

1986: Queen tours for the last time, bowing out at Knebworth on 9 August. Live Magic released in December.

1989: The Miracle, certified platinum in UK, is first LP since Queen II to fail to go gold in the US. Around now, Mercury reveals HIV-positive status to the band, swears them to secrecy. 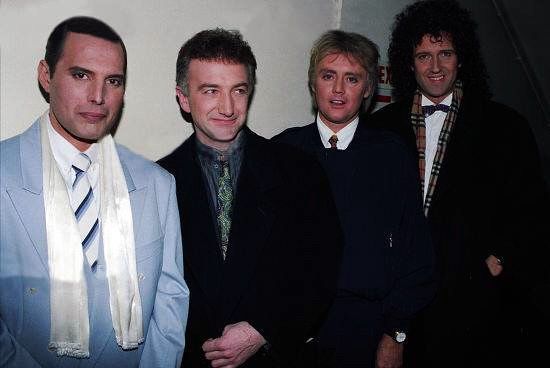 1991: Innuendo and “Innuendo” both UK #1s; latter only #1 single to date with harmonized “flamenco” guitar solo in 5/4 + 6/8 time. Queen’s last filmed appearance is “These Are the Days of Our Lives” video, shot on 30 May. On 23 November, after years of lurid press speculation about his health, Mercury issues statement that he has AIDS; he dies the next day, at age 45.

1992: Freddie Mercury Tribute Concert held on Easter Monday; Bowie delivers Lord’s Prayer on stage. Reissued “Bohemian Rhapsody” a UK #1, US #2, thanks (in US) to use in Wayne’s World.

1995: Made in Heaven, built from vocal tracks that Mercury cut before his death, another UK #1. 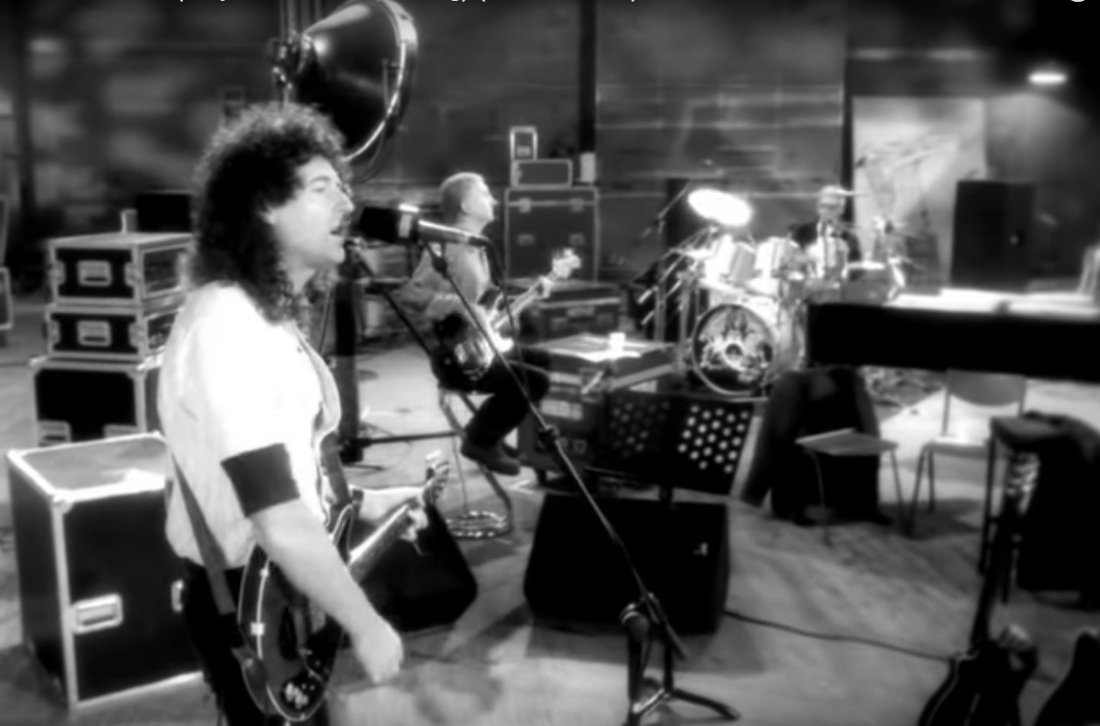 1997: After making “No One But You (Only the Good Die Young)” with May and Taylor, Deacon leaves Queen. Having taken Mercury’s death hard, he sees no point in keeping the band going. In 2014, Taylor tells Rolling Stone Deacon has “completely retired from any kind of social contact” (May: “he still keeps an eye on the finances, though”).

2002: Jukebox musical We Will Rock You opens on the West End, runs for a dozen years.

2007: May earns Ph.D. in astrophysics from Imperial College.

2009: May and Taylor perform on American Idol with finalists Adam Lambert and Kris Allen. Allen wins; Lambert becomes Queen’s lead singer (“Queen + Adam Lambert,” or the algebraic “Q+AL”) in 2011. Q+AL tour in the 2010s and played Japan not long ago.

2013: In Matt Fraction and Chip Zdarsky’s Sex Criminals, lead character Suzie performs “Fat Bottomed Girls.” Despite negotiations with Queen, Fraction and Zdarsky don’t get permission to use the lyric, so they Post-It all speech balloons in which Suzie’s singing.